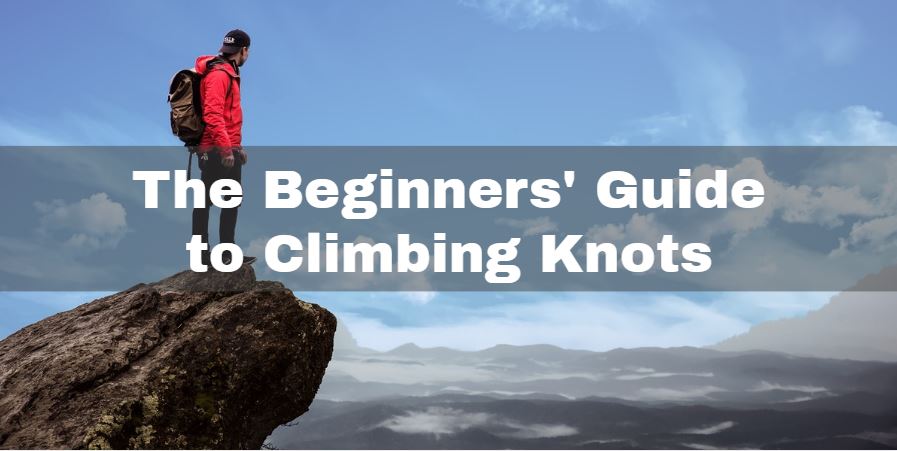 If you’re looking to get into climbing or mountaineering, you’ll need some good rope and will need to know how to tie a range of knots depending upon the specific activities you will be taking part in.

It really isn’t an exaggeration to say that the ability to tie a safe, secure and reliable knot can be the difference between life and death and can help you to get out of some tricky situations while on the mountain.

Below, I will outline a variety of knots that are used for the different types of activities climbers and mountaineers take part in, such as abseiling, rock climbing and the use of safety lines. While this list is not exhaustive, these are the knots you will need to know how to tie and untie in order to keep yourself safe and secure in the vast majority of climbing situations a novice climber can find themselves in.

A figure eight is a stopper knot, and so is used at the end of a rope. This is to prevent the rope from running out and escaping from you.

For climbers, a figure eight knot is considered the basic knot for tying the rope to your harness, or ‘tying in’. It’s also easy to inspect and put right when tied in too, and is still relatively easy to untie after it’s been loaded. It is important to always ensure you have at least six inches of left on the rope when you’ve tied in.

I said in a previous blog post on sailing knots, if in doubt, use a bowline knot. The same also applies to climbers in certain situations, particularly for rock climbers, as it is versatile, secure and reliable. Once you’ve learnt how to tie a bowline knot, it is also very quick and easy to apply; ideal if you’re caught in wet and windy conditions or bad visibility.

A double fisherman’s, or grapevine, knot is used for tying two ends of a rope together. Use this knot to create what is known as a ‘cordellette’, which is a piece of rope tied into a loop, or to create a prusik knot (detailed below).

It is used by climbers as it is a reliable and secure knot if you need to join two ends of a rope together.

It is important to untie a grapvine knot once you are done though, as the knot will eventually begin to weld itself shut if it is left, effectively making it impossible to untie. Also, it should only to be used for joining two pieces of rope.

Furthermore, it’s considered to be the best kind of knot for a rappel as it is easy to tie, easy to untie and it is less likely to get hung up on rock features during rappels.

When tying an overhand bend, you should leave at least 8-12 inches at the end.

A girth hitch knot is used for tying climbing slings to various features including:

The girth hitch is a popular choice with climbers, as it is easy to tie to the point that it can be tied with one hand and is useful in many situations.

However, it is important to remember not to leave slings girth-hitched to your harness belay loop for extended periods of time.

A clove hitch knot is used predominantly by climbers to quickly tie a climbing rope to a carabiner, but is also great for tying yourself into an anchor or equalising an anchor using the rope.

It is also easy to tie and untie with one hand, even after it has taken the climber’s weight, and can also be adjusted easily after being tied, allowing you to quickly clip to an anchor or bolt.

However, at certain forces, clove hitches will begin to slip, which is why they aren’t recommended as the sole knot for tying yourself into an anchor, and they are best paired with another knot such as a figure eight on a bite. However, it’s virtually impossible to ever generate a large-enough and consistent-enough force to cause the clove hitch to slip in a dangerous way.

A munter knot allows you to belay or rappel on a rope with nothing more than a single locking carabiner. This makes it extremely important to climbers, and it is capable of allowing them to still get to safety if they drop the standard belay/rappel device.

It is not recommended for anything other than emergency use though. This is because a munter hitch severely kinks the rope, especially in a rappel.

A prusik hitch allows a climber to attach cord to a climbing rope of larger diameter, and is predominantly used to back up their rappel device. If a climber doesn’t have a mechanical ascender, a prusik can also be used as a way to ascend a rope, and can also be used in a variety of self-rescue and escaping belays situations.

Much like a clove or girth hitch, a prusik hitch is also easy to tie and untie, and can come in very handy at times. For example, a fixed line can be ascended with the use of two prusik hitches.

Please note though that you need to make sure the loops and coils in the rope are neatly kept. Otherwise, you risk jamming the cord and finding yourself unable to move on the line.