Invest in high-quality tug of war ropes for your school

It’s the first term of the new school year – so what better time to update your school equipment? Tug of war rope is a fantastic investment for any primary or secondary school. You could include the game in this year’s PE lessons, incorporate it into the school’s sports day. Or even think outside of the box, and add a fun, physical element to in-class discussions. The possibilities are endless.

Why is tug of war a great activity for schools?

First and foremost, tug of war is an enjoyable non-contact sport, that is suitable for all age groups. It can be played both indoors and outdoors, promoting physical activity amongst pupils, and is a great way to encourage teamwork and co-operation – whilst partaking in a friendly competition.

Secondly, it’s a highly cost-effective option. There’s no need to spend thousands of pounds on expensive gym equipment and apparatus. Tug of war ropes are incredibly cheap to buy. Here at Ropes Direct, for example, they start from just £34.80 – and thanks to their tough, high-quality construction, they’re guaranteed to last for a very long time and can be used over and over again.

Is tug of war safe?

In short, yes – tug of war is perfectly safe. We understand that safeguarding is a top priority for any school and it’s important to weigh up the risks of any new game or activity. But rest assured, as long as you invest in high-grade tug of war ropes and supervise children at all times, the risk of injury is very minimal.

What are the basic rules of tug of war?

Traditionally, a game of tug of war will have eight players on each side of the rope – including a mixture of both boys and girls of the same age. All players should wear sturdy footwear. There shouldn’t be any knots or loops tied into the rope and the rope cannot be wrapped around limbs.

For a standard adult game, the aim is to pull the opposing team approximately four metres over a fixed centre point. This distance may be achievable for older year groups and secondary-aged students. But for younger primary school pupils, it may be worth reducing it to approximately 2-3 metres. Each ‘pull’ should be judged by the teacher and the winning team is the best out of three games.

What length should the tug of war rope be?

Technically speaking, the ideal length for a tug of war rope is 35 metres. This provides ample space for two teams of eight, whilst also allowing the rope to be pulled four metres in either direction.

However, this isn’t essential – especially if you plan to use the rope as a fun school-based activity. Standard-sized tug of war ropes are often too heavy for children, and you may find that a shorter jute rope (with a smaller diameter) is much easier and more comfortable for them to use. 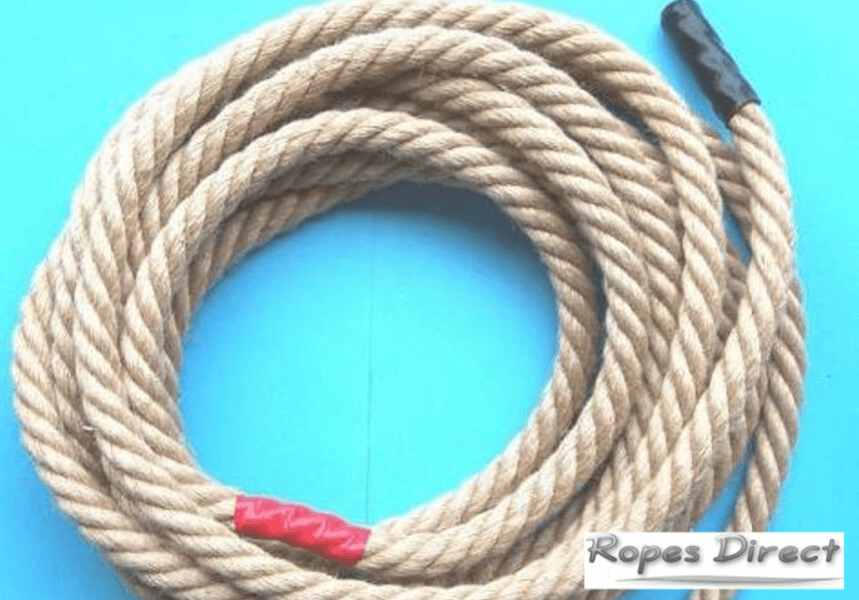 Where can I buy tug of war rope?

If you’re looking to buy tug of war rope for your school, look no further than Ropes Direct. As an exclusively online supplier, we offer a diverse range of tug of war ropes – ranging from 10-36 metres in length (20-36mm in diameter), with something to suit all primary and secondary age groups.

All are made from high-quality jute and feature a polypropylene core – which means they’re tough and hard-wearing, yet incredibly soft to handle. They’re finished with heat-sealed plastic end caps, to prevent the rope from fraying, and have a red tape stripe to mark the exact centre position.

So why not take a look today? Whether you wish to engage children’s interest with an unusual classroom activity or add a new game to this year’s PE lessons, we have the best rope for tug of war. Browse the full collection and, if you have any questions, you’re always welcome to get in touch. Either give us a call on 01692 671721 or send an email to [email protected].

For more information and advice on tug of war in schools, it may also be worth checking out the official ‘School’s tug of war guidance document’, provided by the Tug of War Association.